Simon Gauntlett, Dolby, to speak at our 'Future of TV' conference in March '18 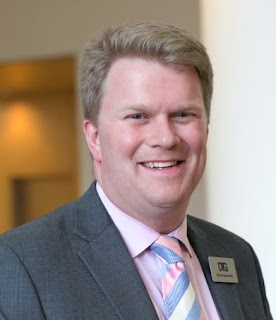 We are delighted to have Simon Gauntlett joining our fantastic group of speakers. He will talk about 'Dolby Atmos and Dolby Vision in production – to deliver next generation pictures and sound'.

Simon is Director, Imaging Standards and Technology, at Dolby Laboratories. He leads a team that works with international standards bodies, broadcasters, and consumer electronics manufacturers toward the development and adoption of advanced imaging standards.

Prior to joining Dolby in 2016, Simon was the CTO of the Digital TV Group, where he helped set up the UK UHD Forum, and was editor in chief for the D-Book, the UK specification for interoperability of the DTT (Freeview) and Connected TV platforms.

Simon has a master’s degree in electronics and communications engineering from Exeter University and BBC graduate training. He is an Honorary Fellow of the BKSTS, and current Chair of the SMPTE UK Section.

Posted by Tommy Flowers Institute at 07:00 No comments:

With great pleasure we announce that we have secured James Walker from Cisco as speaker for our 2018 Spring Conference on 'The Future of TV'. 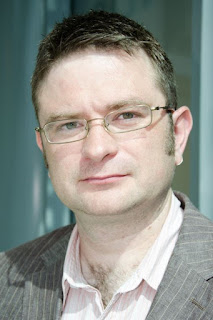 James is a technical leader working in the Chief Technology and Architecture Office of Cisco on media innovation projects. He is leading the platform work-package within the 2-Immerse project.
Prior to Cisco, he worked in the New Initiatives and TV Platforms divisions for NDS, Motorola PCS, C-Cube Microsystems and BBC R&D.
2-Immerse: A Platform for Immersive Object-Based Multi-Screen Experiences


‘2-IMMERSE’ is an H2020 collaborative project creating and piloting new immersive object-based multi-screen experiences. To deliver these service prototypes, 2-IMMERSE is developing an extensible standards-based platform to support the production, delivery and orchestration of these immersive ‘Distributed Media Applications’.
His presentation will introduce the theatre and sports-based service prototypes that that have been designed, developed and trialled by the project, highlighting their key features. It will then present the architecture and implementation of the cloud-based platform we have developed in realising these service prototypes, and our approach to orchestrating the media objects of a Distributed Media Application within the end-user’s device environment.
Posted by Tommy Flowers Institute at 05:21 No comments:

2018 Spring Conference - The Future of TV 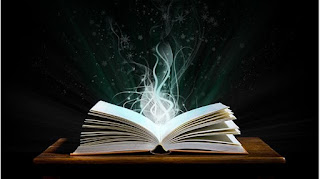 In order to successfully peek into the future one must understand the past. Have you ever been asked what sort of television you had when you were young, in order to guess your age? Throughout history television has been redefined for the generations as technology evolved from
At present industries are more competitive and diverse than ever before. They embrace and drive change faster and faster. There however is one constant throughout, and it is the reason why we watch at all: The Power of The Story

What IS the Future of TV? 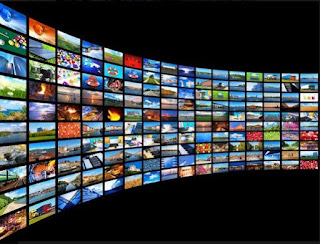 The two-day conference will be opened by Lisa Perkins, the Research and Innovation Director for Adastral Park.

We will hear from fantastic keynote speakers coming from all four areas which are the building blocks of Television:
We will take time to discuss the well known trends - including all the good and bad that comes along, and we will hopefully discover new viewpoints during our breakout and meet and mingle sessions, to take away as inspiration. 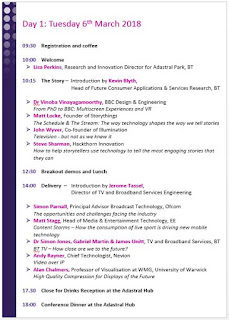 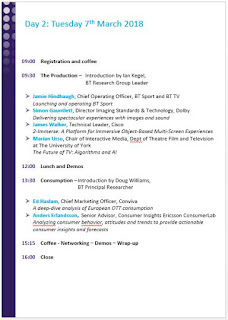 Posted by Tommy Flowers Institute at 05:30 No comments:

Email ThisBlogThis!Share to TwitterShare to FacebookShare to Pinterest
Labels: conference

Television - but not as we knew it

We are absolutely thrilled to have John Wyver, writer and producer at Illuminations, as keynote speaker at our 2018 Spring Conference on 'The Future of TV'.


"Television as we knew the medium since the 1950s may now have come to an end. Yet for the half-century to the early 2000s we understood television as a small-screen broadcast technology for domestic consumption within inflexible programme schedules. With that form fractured and fragmented into on-demand and streaming services, interactive option, social media integration, IPTV delivery and multiple screen consumption in an almost infinite plurality of settings, the television of today and tomorrow is hard to define and predict, let alone understand so as to build careers and business models.
At the conference we will see to offer some context for such a complex world, and consider how television was imagined at another moment of radical uncertainty, in the late 19th and early 20th century. Drawing on the methodology of the emerging practices of “media archaeology” the presentation explores and illustrates the earliest ideas and first instances of television. These include television as a telephone-delivered service to public viewing rooms and television as a large-format form for projection in cinemas. Television - but not as we came to know it." 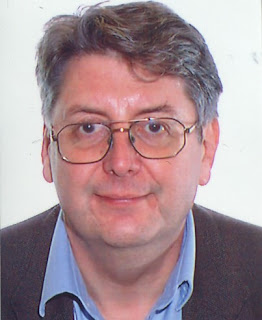 JOHN WYVER is a writer and producer with the independent production company Illuminations. Since 1982 he has produced and directed an extensive range of documentaries and performance programmes about the arts and digital media. His productions have been honoured with a BAFTA Award, and International Emmy and a Peabody Award among others. Working since the mid-1990s with BT Research, BBC R&D and academic partners, he was a pioneer in integrating broadcasting and network media, and he continues these interests in the current 2-IMMERSE research project co-funded by the European Commission's Horizon 2020 programme.
He works with the Royal Shakespeare Company as Director, Screen Projections, and for the company he produces the RSC Live from Stratford-upon-Avon cinema broadcasts, as well as other theatre for the screen including the Donmar Warehouse Shakespeare Trilogy (2017) and the forthcoming Hamlet for BBC Two. He is a Senior Research Fellow at the University of Westminster, where his research interests include the history of the arts on screen and television adaptation of theatre productions. He is the author of Vision On: Film, Television and the Arts in Britain (2007) and the forthcoming Screening the Royal Shakespeare Company: A Critical History.

Posted by Tommy Flowers Institute at 04:37 No comments:

We are delighted to announce that Lisa Perkins, Director of Strategic Research and Innovation, will be opening our conference on 'The Future of TV taking place at Adastral Park, Ipswich on 6th and 7th March 2018. 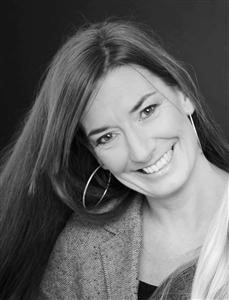 Lisa is director of research and applied innovation in BT’s Technology, Service and Operations division. She is accountable for all aspects of strategic research, down-streaming innovation and partnerships with world leading universities. She actively promotes and drives the digital literacy agenda, working with schools and encouraging children and teachers to develop a love of technology. Lisa runs the Adastral Park campus, including all elements of Innovation Martlesham, and is working on an exciting transformation agenda for the site.
Previously, Lisa was director of customer assurance, strategy and operations, in Openreach CIO and drove the technology strategy and its investment, enabling business transformation and growth for Openreach. She also led service improvement through establishment and adoption programmes across a significant customer base.
Lisa has worked across various areas of BT for 20 years, leading major programmes such as Superfast Broadband, Voice over IP and other cutting edge technical deliveries across core and access networks.
Lisa has two children, plays various sports, is a trust governor for a local Academy school and is an accredited coach.

Posted by Tommy Flowers Institute at 06:33 No comments:

A bit of wonderful history

We received a proper letter! 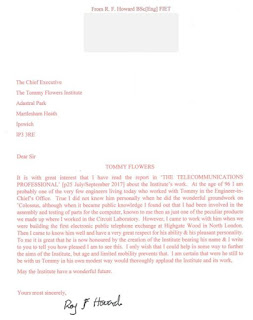 We not often do. Everything is digital and cyber and cloud these days. Although this is our bread and butter business, receiving this letter touched a beautiful nerve. This was not a bill or an advertisment: Somebody had taken an effort to write, print, find an envelope, put a stamp, and drop it into the post box to send us a kind and joyful message regarding our champion, Tommy Flowers.

As we enter the second year of our endeavour, we would like to share with you this endorsement.


TOMMY FLOWERS
It is with great interest that I have read the report in 'THE TELECOMMUNICATIONS PROFESSIONAL' [p25 July/September 2017] about the Institute's work. At the age of 96 I am probably the one of the very few engineers living today who worked with Tommy in the Engineer-in-Chief's Office. True did I not know him personally when he did the wonderful groundwork on 'Colossus', although when it became public knowledge I found out that I had been involved in the assembly and testing of parts for the computer, known to me then as just one of the peculiar products we made up where I worked in the Circuit Laboratory. However, I came to work with him when we were building the first electronic public telephone exchange at Highgate Wood in North London.Then I came to know him well and have a great respect for his ability & his pleasant personality. To me it is great that he is now honoured by the creation of the Institute bearing his name and I write to you to tell you how pleased I am to see this. I only wish that I could help in some way to further the aims of the Institute, but age and limited mobility prevents that. I am certain that were he still to be with us Tommy in his own modest way would thoroughly applaud the institute and his work.

May the Institute have a wonderful future.

Yours most sincerely,
Roy F Howard

We herewith pass on those wishes to all our members and supporters for a wonderful 2018!

Posted by Tommy Flowers Institute at 07:43 No comments: